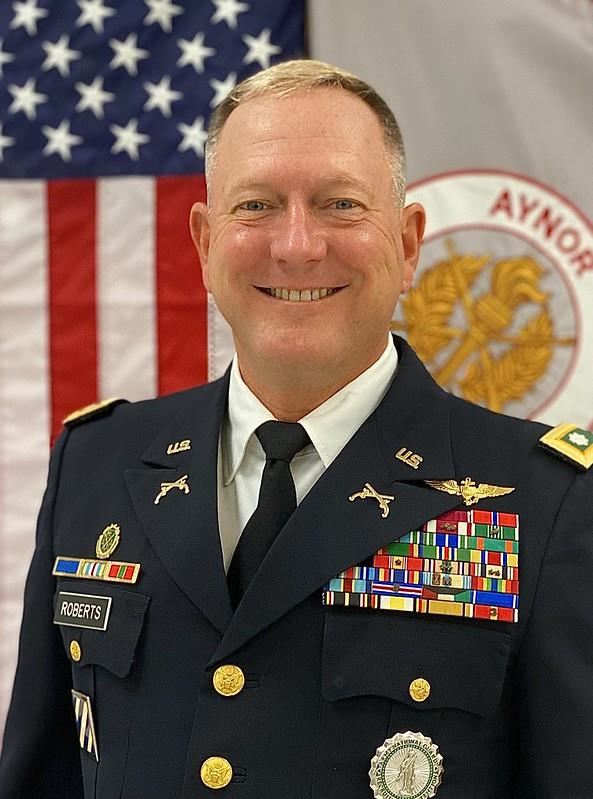 Lieutenant Colonel (Retired) David E. Roberts was commissioned in 1988 as an Ensign in the United States Navy through the Naval Reserve Officer Training Corps (ROTC) at Auburn University. He received a Navy ROTC Scholarship after participating in the Air Force JROTC program at Tift County High School in Tifton, Georgia. Upon commissioning, Ensign Roberts attended Naval Flight Training and received his Naval Aviator Wings in May 1990. As a Lieutenant Junior Grade, he attended the Navy-Marine Corps Intelligence Training Center in Damn Neck, Virginia. He then deployed to the Persian Gulf aboard the aircraft carrier USS Ranger (CV-61) in 1992 during Operation Southern Watch. Lieutenant Roberts separated from the US Navy in 1993.

Lieutenant Colonel Roberts joined the Georgia Army National Guard in 2000 and was assigned as a Military Intelligence Officer and Executive Officer in Company B, 221st Military Intelligence Battalion (Tactical Exploitation). In 2001, he was re-assigned to the 3rd Infantry Division (Mechanized) Detachment as the Division Rear Command Post Tactical Intelligence Officer. Then Captain Roberts was mobilized by the division and deployed for Operation Iraqi Freedom and participated in the invasion and liberation of Iraq. After redeployment, Captain Roberts transferred to the Texas Army National Guard, where he served as Commander, Company C, 636th Military Intelligence Battalion (DS).

In 2005, Captain Roberts transferred to the 115th Military Police Battalion, Maryland Army National Guard as the Tactical Intelligence Officer. He was ordered to active duty in the Active Guard/Reserve (AGR) program in 2006 and promoted to Major. Major Roberts served for the next four years as the Executive Officer of the 1297th Combat Sustainment Support Battalion. His next assignment was as the Maryland National Guard’s State Partnership Program Director on the Joint Staff. He was then promoted to Lieutenant Colonel in 2010 and assigned as the brigade Operations Officer for the 58th Troop Command. Over the next six years, Lieutenant Colonel Roberts also served as the Commander, Maryland Recruiting and Retention Battalion, the AGR Branch Manager, the Assistant Chief of Staff, the Deputy G4, and the Deputy Chief of Staff for Intelligence/G2.