Carolina Forest High School claimed its fifth state championship at the We the People: The Citizen and the Constitution competition sponsored by the South Carolina Bar Law Related Education (LRE) Division. The school team is eligible to advance to the national competition on April 25-28 at George Mason University in Fairfax, Virginia. Carolina Forest High School holds the state titles for 2014, 2013, 2009, 2004 and 2003. 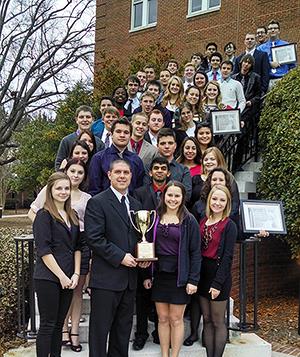 We the People is an in-depth study of American history with an emphasis on understanding the formation of the Constitution and its interpretation throughout history. Its goal is to promote civic competence and responsibility among the nation's students by enhancing students' understanding of the institutions of American constitutional democracy and allowing them to discover the contemporary relevance of the Constitution and Bill of Rights. Students competed in a mock congressional hearing and discussed critical issues regarding American government, the founding fathers and current events based on a constitutional perspective.

Horry County Schools’ Scholars Academy holds four We the People: The Citizen and the Constitution state championships, winning in 2012, 2011, 2008 and 2007.

Learn more at SC Bar We The People.