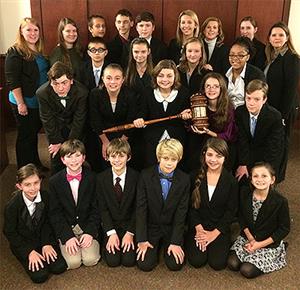 The team was coached by teachers Gretchen Almeida, Grace Burleson, Kati Shumway, Alexis Tejera, and Kim Welch. Audra Byrd, Esq., was the attorney coach who volunteered and worked with the team.

During the state competition, students presented the prosecution and defense of a fictitious case before a panel of volunteer judges and attorneys. They also filled the roles of attorneys, witnesses, bailiffs and timekeepers. Each team was judged on its presentation skills, rather than the legal merits of the case.

In the fictitious case of the State of New Harmony v. Charlie Spencer, Brook Bentley, the owner of a lobster boat, accused Spencer of sinking his boat after a hole was discovered in the boat’s hull matching the diameter of a drill bit found in Spencer’s nearby truck. Bentley and Spencer, both lobstermen, were witnessed in an altercation on the day of the boat sinking. Spencer was charged with assault and battery of a high and aggravated nature and with malicious injury to personal property.

The Mock Trial Program is sponsored by the South Carolina Bar’s Law Related Education (LRE) Division, which was developed in 1976 to improve the ability of teachers to instruct law related education. The program is supported by the Bar’s LRE Committee and made possible through a SC Bar Foundation IOLTA grant and the SC Bar. Learn more at www.scbar.org/lre.