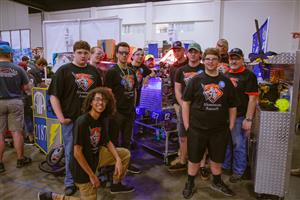 Convention Center for the Palmetto Regional FIRST Robotics championship games. Nine teams from Horry County Schools high schools as well as teams from states as far away as Hawaii traveled to the beach to take part in the "steampunk" themed challenge. Throughout the 2 days of the competition, alliances built of three teams each competed against each other, remotely driving their built-from-scratch robots, commanding them to toss plastic balls into copper-toned hoppers, place gears onto shafts throughout the game structure, and finally grabbing ropes and hanging from towers on the game floor.

For the Academy for the Arts, Science, and Technology’s Aluminum Assault robotics team, a series of fortunate events led them to receiving FIRST Robotics “Wild Card” opportunity, earning them a place in the upcoming FIRST Robotics World Championship in Houston, TX.

Driving the Robot AAST’s Aluminum Assault were the only HCS team to make it into the semifinals. While they were one of the eight, top-scoring teams from the event (making them eligible to create their own alliance by choosing two other teams), Aluminum Assault opted to join a higher-ranking team’s alliance. The outlook was grim as the alliance lost the first two out of three matches. However, a glitch in the scoring system led to the FIRST Robotics organization to mandate a replay of all three semi-final matches.

While three wins in the semi-finals pushed the alliance into the finals, the teams could pull just one win and gave up the title. FIRST Robotics championship eligibility criteria states that any team which has won a previous regional title and goes on to compete in another region’s championship creates a “wild card” slot in that event, allowing a team to “move up” into the World championship. Such was the case for AAST’s Aluminum Assault.

AAST's Aluminum Assault Currently the team is making plans to attend another FIRST regional robotics competition in Kentucky before the World competition in St. Louis. They are actively seeking donations and sponsors to help defray the costs of team travel. If you’re interested in helping sponsor the team, contact the AAST.